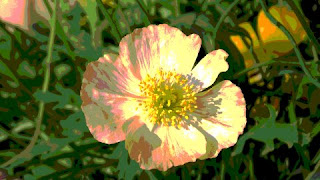 Saturday, March 3rd;
I was at work and around during lunch I began to experience a lump in my throat. Like taking your thumb and pushing in right at the "hole". As I went back to my department I described a feeling of my lungs hurting to my immediate boss, Gina. She left at and I was on my own. As I was working I began to experience shortness of breath along with the other stuff and terrible heartburn (which I had been experiencing for 2 days already). If I moved too fast I would feel lightheaded (no nausea tho') and I also started to experience disorientation; I could barely concentrate on a simple task and my nightly routine was another thing I couldn't keep in order.
At Mike came in after he got off work and it seemed the moment I saw him I just 'let go', felt secure, you know? I told him to call Kevin and describe my symptoms and to call the hospital to see if I should go in, Kevin said I needed to get to the E.R. immediately--twice. I called a floor supervisor and told them (and I had already called them earlier to ask if I could go home early because I wasn't feeling well) that I was dropping everything and that my son was here and I was headed to the E.R.
Got to the E.R. at --got lost because I couldn't recognize things in the dark--they took me in and hooked me up with the ekg, took about 3 vials of blood and proceeded to monitor me. They gave me one nitro glycerin pill and within seconds it took away all the symptoms for about a half an hour. They gave me another one and that lasted for 30 minutes as well. Then they gave me a cocktail of Maalox and xylocain to numb the esophagus and that was the one that stopped all of them. They then suggested it was either angina or spasms of the esophagus and I was to stay there until when they would take another blood sample to be sure. I was discharged at and everything stable.
I have a doctors’ appointment on for further information.
Posted by Pooz Korner at 10:43 PM No comments:

The Blessings of Old Friends 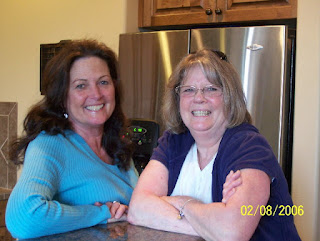 What a wonderful gift friends are.  Sometimes when friends separate due to life’s interference, the friendship fades away. The memories are still there, the love and caring is still there, but the people are miles and ‘times’ away.
Some of the wonderful things about the internet, email and Facebook are that you can still feel “right there” so that when you do get a chance touch base with your friends, it feels just like they or you never left.  This day I had the chance to reconnect with one of my very special friends in life, Laura.  I stayed with her at her house when I visited last year.  Laura is a very sweet soul, kind-hearted, giving, funny and loyal.  You don’t get too many of those in your lifetime.
Laura’s daughter lives in , about 20 minutes north of and she was down here “on the outside” visiting.  I told her I would take her out to lunch, my treat, so we could have a little time together.  All Laura had to do was give me the address and I would enter it into my GPS and that those directions would lead me right to Kimmie’s front door.  Oh I would have never found Kimmie’s place with pen and paper, I am directionally dyslexic.  I don’t know if that’s a word but it IS a condition.
So when I showed up and rang the doorbell, Laura opened the door and the first thing she said was, “You made it!  It worked!”, her expression was cute.
She invited me in and we sat in Kimmie’s living room and had a soda, chatted for awhile and took some pictures and off we went to have lunch at .  We celebrated and saluted our friendship and meeting with a wonderfully delicious margarita.   We then ordered CHICKEN chimichangas but when they arrived, they both were beef!  We just thought the heck with it, we didn’t want to wait anymore and they were good so we let that one go.
Of course, the visit wasn’t long enough and we soon had to part—mainly because the both of us got the ‘sleepies’ and we wanted to go home and take a nap!  Ah, the graciousness of true good friends…
I’ll see you again Laura, and thank you for being my friend.
Posted by Pooz Korner at 10:20 PM No comments: 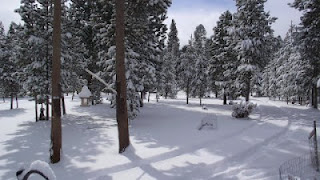 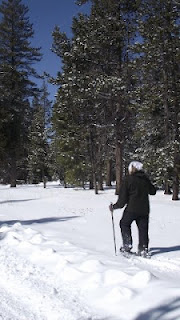 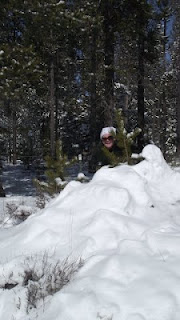 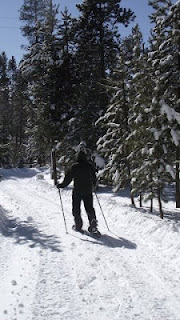 Snow, finally.  It has been a long and ugly winter.  Nice and cold, not too bad as winters go, but relatively snow-free until the 28th of February/first of March, then it melted and now snow again on the 12th.  Mostly sunny skies and a bleak, coffee brown landscape.  I'll call it the come and go snow season.
There they stood in the box in my room.  Snowshoes.  Patiently waiting to be exercised again.  Just waiting.  Once in awhile I thought I could hear them scratching the sides of their long, dark cardboard tomb.  But that was just my imagination.
And then on that Thursday, the 1st of March, I hauled them out of storage, stepped outside into the bright sunshine and strapped them on before the snow could melt.  I didn't want to miss this one!
They say that you can burn 500 calories in an hour while snowshoeing.  You can burn 200 calories just trying to get them on!  It took a few times of rearranging my feet and the shoes before I finally remembered which way they were supposed to go.  Next time, I'll take pictures and create my own directions of "How To Put On Snowshoes". You know, "TGIF", as in toes-go-in-front.
I was almost feeling guilty that I wasn't up on the mountain, really getting my workout.  On the other hand, I have two acres of my own to plow around and I live two miles from the state park AND I saved gas by NOT driving 40+ miles to go 'hike'.  I really did walk around the property and as soon as I finished that, I didn't have any more trip guilt.  Then I took off up the snowy road we live on and walked about a half a mile--there and back--and was thoroughly guilt free.  You don't have to drive miles and miles to go have fun or get that workout, you can do it right in your own front yard!  And with all that snow and the beautiful day, it was just as wonderful as going out into the wilderness, except the coffee is a lot closer.  I am sure I earned that 500 calorie donut by the time I clomped back up on the deck.
Cheers!
Posted by Pooz Korner at 5:09 PM No comments:

Catching Up With March! 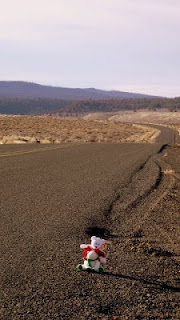 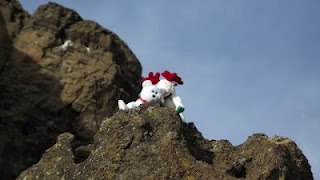 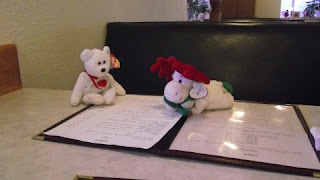 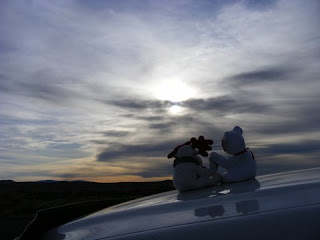 MARCH. March. MARCH!
Man, has March come in with a slam bang and woke me up!  I’m not sure if it’s because I haven’t had time to write or just couldn’t get my ‘stuff’ together.  Now all of a sudden there is a lot to talk about.
Beginning in February, I created (along with Kevin’s help) a book for Evan and Eric.  It started out as a day trip down to and somehow or another, two little stuffed critters; one a small white bear and the other a small white reindeer, came along on the trip and the story was born in the driveway.  I placed Reiny and Harty on the dashboard of the truck, their arms intertwined and the story began with, “Well Reiny, are we going on an adventure today?”  As they lay on the dashboard, their faces looking up at the sky, they saw animals in the cloud shapes.  Arriving in the area of , we took pictures of them sitting on top of the truck, looking off into the distance with the big bowl of in front of them.  Then next idea was to have “the boys” CLIMB and summit Fort Rock, a small reference to the accomplishment of Evan and Eric’s mommy and daddy summiting South Sister in 2011.  Oh and they found ‘caves’ and talked of monsters, they read placards describing local frontiersmen.  And when the little guys had finished their descent, they went on to stop at a local café for refreshments and to replenish their strength.
I hear the REAL boys love their new book.  I can’t wait to read it to them, too.  Or maybe Evan can read it to me by the next visit, which is another story in itself.
Posted by Pooz Korner at 4:16 PM No comments: