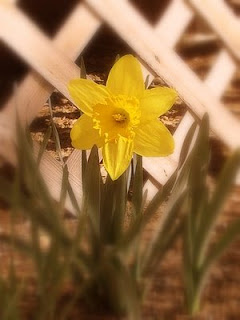 I saw my first daffodil blossoms yesterday morning and as usual, I trotted outside today with coffee cup in hand to check out the two bright yellow faces and possibly some sister blossoms. But this morning...well, they were pretty sorry looking; all bent over and sort of irridescent. Apparently we had a chill factor of 16 degrees last night. Now that it is later in the day and the warmth of the sun has taken the chill off, they don't look as wilted and sad, still, they are a bit hunched. The tulips haven't sent their blossom stems up yet but the hyacinths were standing tall and ready to burst. They are only slightly wilted so maybe I'll still get a few of those to open in a day or so.
All the bulbs that have been poking through were planted by the previous owners and the first year we were here I had some nice surprises.
And now, we don't have water. We had showers and I even did the dishes when I got home from town earlier. Kevin went to water the backyard and pfffhhtt! Dribble dribble...then nothing. Good grief. Of course it's a weekend. Nothing ever happens on a weekday when you can call the plumber or the electrician on regular hours and regular pay. Ohhhh noooo, it has to happen on a weekend and at the moment, Kevin is on the phone with the plumber trying to figure out the problem. We haven't heard anything splashing under the house and water is going from the pump to the pump house but nothing from the pump house to our house. We shall see...

We lost one of our little chipmunks the other day. I found it amongst the tulip leaves, just kind of laying there. They don't just lay, you know, they are such busy little creatures. So I watched it for a few minutes and noticed it had labored breathing, then it kept trying to hop but it did a wobble hop. This was not a good sign. I tried to see if it had bite marks from a cat or a dog or even one of the squirrels but I couldn't see anything. Kevin seems to think it might have gotten into some mouse poison somewhere.

My dear husband found a little plastic plant container and an old clean rag and bundled little Chip in it to keep it warm, hoping this might be some sort of passing thing and maybe it would be alright by then next morning. We left it alone so we wouldn't be a part of it's stress but by the next morning, Chip had gone to the big cornfield in the sky. Chip's little mate is still running around and I have no clue as to which sex either of them was/is, so the waiting game is on for any mini Chips.

We had three days of HOT, hot compared to 30's and 40's mind you, then we went back down to 50+ the last two days. Now, I'm not sure if this 16 degrees last night had anything to do with our not having water. The well pump is working out in the front yard, hmmm, guess it's a good thing I know how to take a shower with one gallon of water. Thank heavens the laundry is all done because doing laundry in a bucket is the real nightmare. Havng lived in Alaska for a few years without running water in the winter taught me a few things on how precious water is and how fortunate we are to have the inventions we do today.