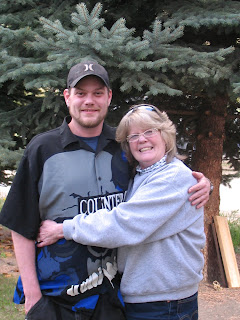 And so it was another year was coming up, another year to pass that would add one more year to the many that I had not seen my son. We had made several attempts to get together over the last four years but something always seemed to occur that would prevent this. There were years when we simply didn't connect. Well in this life and on this planet we just don't have that kind of time to waste.
After re-uniting with my precious son and hearing that he had been in the hospital several times, I simply decided to take the time off from work and go see him.
Eleven years had gone by since we were last together. It's the same amount of time it took to bring him into this world and it was an eleven hour drive that brought us back together. The moment I saw him, all six feet four of him and 30 years old, the tears came flowing. "Aw mom, you don't have to cry" but oh yes, I did.
"Michael, whatever has gone on, whatever has happened is all water under the bridge. Let's not ever let this much time get away from us again."
I arrived at 6:30 p.m. and seemed to catch my second wind. As the night went on, we talked and talked and talked. Memories flowed through the both of us like lightening bolts, laughter erupted over silly things the family did, places we went and then there were some quiet moments. Somewhere into the night I suggested we should probably go to sleep and I asked Michael what time it was. He said I didn't want to know but I threw out this guess, "What, it's probably 1:30 a.m. or so?" and he responded that it was 4:00 a.m.!
I couldn't believe the time had gone by like that, just like the eleven years, in the blink of an eye.
This trip brought us back into each others' lives, healed some wounds and made me feel whole again.
What a fabulous gift for a mother. Not everyone gets a second chance.
Posted by Pooz Korner at 5:13 PM No comments: