Looking Into The Past 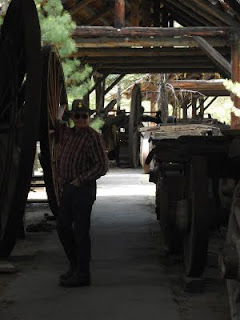 I didn't realize it until I tagged the title but this little tale truly is about looking back into parts of the past. 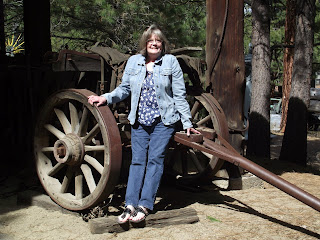 This was Easter weekend and with four days off, Kevin suggested we take a drive south to check out a piece of property we own in California. A piece of property that was someday going to be my dad's retirement home, complete with a little A-frame country cabin and lots of time to read and listen to the wind blow through the pine trees. A piece of property I plan to give to my children.
Saturday I deposited our income tax money into the bank account, got an oil change done on the car and we were ready for our little road trip to the booming (more like busted) town of Dorris, California. On the way we stopped and visited an old logging museum and also the Klamath Wildlife Refuge.
It all started way back in 1966...
Dad, mom and I drove up to the Dorris area to buy a two and a
a half acre plot of mountain property 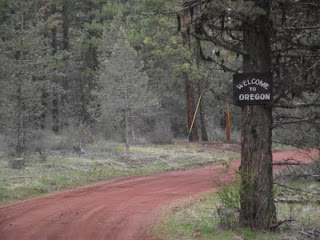 , I was 12 years old and not much into paying attention to the details of the adult world. My recollections are short and hazy, jumbled into crazy bits and pieces. I remember a 'mountain' with steep and rutted dirt roads hindered by huge stones and boulders. I can tell you now that in 45 years, it hasn't changed much, if at all.
I remember sitting in the kitchen of an even then old two-story white farm house where mom and dad signed the papers as the new owners of Plot 375 in Pleasant Valley Highlands. I am guessing that way back then that the cattleman/farmer was parcelling out pieces of a hill just to earn a little extra cash. I remember a long, dusty dirt road. Nothing in any particular order and not a whole lot, either. Try to put those pieces together 45 years later when you're trying to find a plot of land on a small mountain. Things do change in terms of getting lost and swallowed up.
But I will say this, I don't think the county has done anything new with the highway since the last time I was there; there are parts of old cracking white cement intermingled with asphalt and probably the same ruts. It's just a dot on a truck route and I'm sure some would wonder why on earth anyone would want to live there.
Peace and quiet and neighbors who wouldn't think twice to help you out.
And the wind whooshing through the pine trees. You won't get THAT in an L.A. suburb.

We headed west toward the hills--there is more than one--to see what we could find. We had a few road names and proceeded on Picard, which was supposed to lead us eventually to Glen Gary and Cedar Grove. "Oh and by the way, none of the roads are named but you'll be able to find it, I've been there twice" the county clerk we'd called the day before said. Prior to heading out we had stopped at a little quickie store, Kevin looking at a city map and questioning the young clerk about directions. Another young customer overheard the conversation and began to give some directions with landmarks, he being the local tow truck driver who's pulled many a stuck adventurer out of those hills, he knew what we were looking for. So with his information we looked for "a row of trees along the road that look like they were planted there, you can't miss 'em and then a road with a chain across it, your road is in between those. But your little car won't make it up that road without gettin' stuck". I took him at his word so that on our second pass of those landmarks, we decided to park the car and walk up the steep hill. I had come this far and it had been so long and we were so very, very close, I felt I had to go as far as I could.
The red dirt road--and the red comes from the volcanic red cinders--was pitted and rutted and full of huge rocks, just like I remembered. We gave it a shot and walked on up, stopping now and then to just listen and think and breathe. It must have been close to 3/4 of a mile when the area flattened out a little but then the road simply disappeared. No more red cinder, just an overgrown area full of little oak trees, jack pines, ponderosa trees, fallen timber, lava rock and those round boulders that were all over. We walked and walked around there, even found an old steel marker and a few orange hunting marker strips hanging from some tree branches. It didn't look anything like I remembered, of course, and the little valley that I remember looking out on wasn't visible in the slightest way. Not after 45 years of forest growth, IF I was in the right spot. I had to give up before we got lost in those woods. I said to my dad, "I tried to find it mom and dad". I talked to the land and said I would try again to find it from the computer. I said my goodbyes and then I found a rock to bring home, just to say I had a part of it.
I had given it my best considering this was Easter weekend and most likely all city and county employees would have been enjoying the holiday at home. We stopped in at a city office but the clerk had left a sign that said, "Out To Lunch". We stopped by the sheriffs' office twice, a sign outside said office hours were "8 to 10:30 and 12:00 noon to 4"30". He was nowhere in sight at 12:05. This is such a small town that we were thinking the neighbors might even call the police to report a slow and suspicious car cruising the streets.
Two visits in 45 years. Dad's dream of that little red A-frame looking out over the cattle and wheat fields is still vivid in my mind. Maybe someday it will happen.
Then we came home to havoc! The squirrels must have partied like it was 1999! The large bird feeder we had strung up between two trees was laying on it's side on the ground, the contents spilled in a 5 foot radius, squirrels drunk with excitement about their coup. And then...our car comes up the driveway. Like roaches scattering when the lights come on, gray furry bodies were fleeing in all directions. Let me tell you, they weren't hi-fiving when The Witch came home!