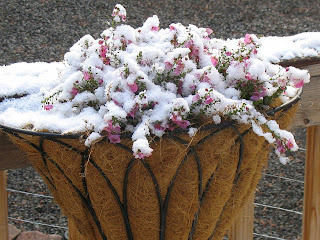 Oh what a reaction one gets from people around here when one uses that little four letter word. Some behave as if you have truly said a bad word. Frankly, I love snow. I can't imagine why one would live here if one didn't like snow. There is always Southern California, New Mexico or Arizona.
I love the changing of the seasons, living with the 'real' harbingers of spring, the Ides Of March, and seeing 'termination dust' come in October. I don't recall any real seasonal changes where I grew up,it's all turned into a blur by this age. I see summer and then simple shades of gray. Growing up in the Bay Area east of San Francisco, the glazed crusts of the puddles underneath the playground swings at school meant it was winter. Walking a half mile to school in the fog, looking up at the seemingly revolving orange ball through the mist of it, that was winter, too.

I'm not sure if I love the snow because I feel I was deprived of a Currier and Ives Christmas every year or if I would love it no matter what. My very first white Christmas was in 1979, when I moved to Montana. I was pregnant with my first baby but that didn't stop me from being ecstatic when the first flakes began to fall. It was even more fun to experience that the following year with a one year old in a sled! And for the next fourteen years my little family made it an all day event to head for the hills to choose their own tree.
I'd fix up a pot of hot chili and hot chocolate fixings, load up the truck with all the boots, jackets and gloves I could shove in there, throw in the kids and the husband and off we would go, driving up the logging roads into the forest. In later years when we reached the real climbing zone, we'd tie up ropes to the bumper of the truck, attach them to sleds and toboggans, then tow grownups and kids all the way up to the 'hunting grounds', at least a good three to four mile ride. I had more fun listening to the kids yelping and squealing and watching the laughter on their faces. That was one of the best parts of the day. Nowadays one would probably get arrested for child abuse, but MY kids would tell you THAT was FUN.
At the end of the ride, or top of the hill, everybody would gather around the tailgate, ready for that piping hot chili and hot cocoa that we heated up on the ol' Coleman stove. Nothing tastes so good when you've had that much fun and you're cold, the air is so crisp and clean and your tree is resting on top of the vehicle. Now of course, the tree hunt probably took all of an hour, traipsing through the knee-deep snow passing off all the imperfect specimens. And then...THE ONE...there it was, about a hundred yards off and hiding behind some big papa tree. But we'd see it, "There it is, that's the one!!" someone would yell out gleefully and off we would all trudge to stand in judgement. Hardly ever did anyone argue since most everyone was pretty worn out, wet and ragged and too tired to disagree.
So on went the process of tying it down and hauling it back down to the valley, kids in tow STILL wanting to ride down on the sleds, tires and toboggans. They may have been wet and cold but they were getting in as much of it as they could.
Now those are great snow memories.
Then I moved to real snow country. If living in Alaska doesn't kill your love for snow, nothing will. The winter of 2002 I moved into a log cabin I was building. The floor was in and the walls were up and the roof consisted of a blue tarp strapped down. All winter. In Alaska. Until May. Now that's tough. There was plenty of firewood to feed the wood stove that was always hungry. Not only did you keep yourself warm standing by the fire inside but you warmed your insides hauling, sawing and chopping wood outside, often in sub-zero conditions.
Snow...
I love that four-letter word still. I have a sturdy roof over my head now and a pellet stove to keep me warm, along with a wonderfully cuddly husband who lovingly trudges out through three feet of snow to the garage, in the dead of winter, to bring back a 40 to 50 pound sack so he can spill the contents into the open mouth of that lovely Kozi pellet stove, just to keep me warm.
Posted by Pooz Korner at 3:40 PM No comments: