Everybody Loves A Chick 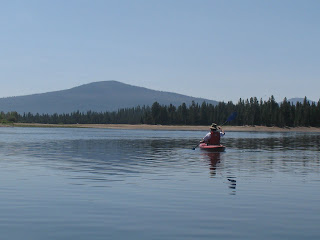 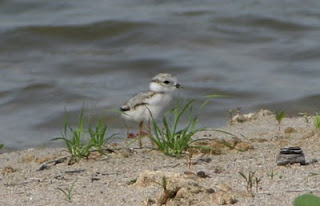 What is cuter than a little bouncing chick? A fluffy, grey and white bouncing chick! Yesterday was another great kayak day and so we loaded the boats up for another adventure, this time over on Wickiup Reservoir just a few miles south of home.
Sunny skies with a few cottony clouds, a gentle breeze, snacks made earlier and our sunscreen and cameras made our trek an easy and sweet one.
We drove to an area of the reservoir that was a connecting river channel between Wickiup and another lake, a great place to begin since it was easy access with the trailer. The area held a small meadow that the Deschutes River meandered through, tall green grasses swayed in the breeze as the red winged black birds hung on for support. Kevin and I had made an attempt at paddling UP the stream and decided rather quickly to abort that idea; the current was a bit stronger than we anticipated. We let the current turn us around and then we were off. There is not a lot of vegetation alongside this portion of channel; it consisted mostly of very sandy soil or round river pebbles, the water was fairly shallow and one could see the bottom 90% of the trip. The pine trees and old aspens hung back along the ridge
line mostly, making it seem almost barren. Still, there were lots of places to pull up on a shoreline and take a brief respite. After first launch, our speed was pretty brisk for 6 or 7 hundred yards, then turned into very calm waters and easy cruising. Lots of land-side fishermen and women casting in to try their luck. We saw quite a few trout underneath us, I could have sworn they looked up and laughed at the beach casters.
The weatherman said it would be close to the 90's and I don't think he was too far off. I was glad I had brought frozen drinks from the night before. Peanut butter and jelly sandwiches probably don't sound all that great but after a few hours of heat, exercise and fresh air, they tasted pretty darn good! We had pulled up on a beach where a few aspens and poplars were grouped together to make a great shaded area. And thanks to a beaver from a few years previous, we had a nice fallen tree bench to sit on.
After lunch break was over we hopped back into the kayaks, spying huge bird tracks in the sand as we trudged back down the beach. These turned out to be either a great blue heron or possibly a sand hill crane, both of which frequent the local lakes and reservoirs. "Big Bird" indeed.
Off down the far side of the smooth channel, we coasted around a point that led to a smaller, winding stream. Nooks and crannies are what make the kayaking fun, being able to go into shallow and tight areas that other watercraft cannot. We could see by looking down at the plants waving fronds that there was a strong current coming from around the bend. Paddling around the bend, the water was no deeper than one foot in some places with sharp drop offs leading to 3 and 4 feet deep. Heading around one more bend we heard the roar of a falls, this turned out to sound much bigger than it was. We couldn't paddle all the way up due to several tree stumps placed across the six foot wide creek. Kevin latched onto one of the roots of the stumps, handed his oar back to me and hauled me up next to him so we could both sit there and enjoy the sounds and the view. It wasn't a big falls, probably 2 or 3 feet high at the most, but we were the only people there, no other ugly human sounds to spoil the ear fragrance. Soon we let go, turned ourselves around and floated back out the way we came, letting the stream push and spit us back out into the lake. It was time to head back and we were in no hurry. No appointments, no weather making us fear rain or lightening. It was on the return trip that we stopped at another sandy point to beach and stretch our legs a bit. That was when I heard the distinctive sing-song of either a plover or a killdeer; both of which inhabit the areas and like to roam the waters' edge. I've seen killdeer and I think this was a plover, it was rather small and I thought it was a chick at first. But this bird began it's diversionary dance, the injured/broken wing gig to take us away from its young. That was when I began to look for the chicks and spied movement off to the left of Mother. Little gray fur balls were blowing amongst the beach grasses. They skittered and chirped to mama, all the while they were running they were staying in contact with Mother, never getting outside of earshot. These little grey and white fir balls were hardly bigger than a golf ball with legs on them! And as they would run, every two or three steps they would aim their tail in the air and bounce. I don't know how they ever get away from a predator--other than flying--if they count on their fleeing gait. Step-step-bounce-bounce a grey fluff goes through the reeds.
For those of you who are curious and smart: where did I get the photo of the plover chick if I didn't have my camera? I would like to thank Chris Thody of the Tern and Plover Conservation
Partnership (Wayne Hathaway photographer) for granting permission to use this image.
Posted by Pooz Korner at 4:13 PM 1 comment: