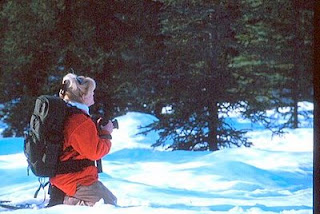 It was one of those few-and-far-between Alaskan days; crisp, clear and blasting with sunshine when I decided to get out of the house for a snowshoe hike in the woods and do a little photography as well. Taking my camera gear, a backpack with film (before digital was popular) and two side arms, one a Berretta Matto .338, the other a .454 Casul in case I encountered any grizzlies along the way. Contrary to popular belief, grizzlies do not necessarily hibernate all winter long. If they haven’t built up a significant amount of fat, they will keep foraging for food until their fat stores are sufficient for their long sleep.

After weeks of the intense February deep-freeze, this was not a day to be ignored, so strapping my snowshoes across the top of the backpack and making sure that I had easy access to the weapons, I left the truck behind and trudged on down a winding snowmobile into the bright sunshine.

I had never been on snowshoes before and had no clue what was ahead of me. Walking along the snowmobile trail only a couple of hundred yards I spotted a lovely rolling meadow, it was a beautiful expanse of blinding white mounds and it was calling to me. This looked like a great place to start, I wouldn’t be disappearing into thick woods and I figured I could get out fairly easily if I had to. I took off my backpack and proceeded to strap on the snowshoes thinking this is easy enough. I can do this. I was exhilarated! This was going to be fun!
Snowshoes on, backpack refitted and I was off, stepping out from the trail onto snow that was at least three feet deep with the first two or three inches soft and powdery.

It took a few yards to adjust my body and balance to the Bozo feet but it certainly wasn’t difficult, although it did take a bit to get the rhythm. Now one thing that all of my friends and family know about me is that I have never have had any rhythm or grace! I would recommend practice before adventure; learn how to get yourself up and to take walking poles along. Did I do this? Nooooooo. I learned along the trail and herein lies the story…

One thing a person should know BEFORE they go out and play with snowshoes is how to get up if you fall while traversing DEEP snow. The area off the snowmobile trail turned out to be waist deep as I soon learned. I had stopped about a quarter of a mile out, sun shining on twinkling snow, no other intruder had marred the area. I walked in circles and I walked straight lines, inhaled that unbelievably fresh air, everything seemed so much more intense; the green of the Sitka spruce trees, the blue sky and white clouds, even the color of the sun was different, always a late afternoon hue at that time of year.

Just going nowhere soon lost it’s hold when I had this bright idea to kneel down for a few minutes and inspect my little area. As I leaned over to inspect the bindings the weight of the backpack propelled me face forward into the snow. I had been hand carrying the camera and my first thought as I was going down was "Don't land on the camera, don't let the camera fall in the snow!" As I went down I threw my left arm straight up over my head and with a certain amount of body contortion I managed to save the camera. Okay, I thought, no problem, piece of cake.
As I put my free hand down my whole right side promptly sank up to my shoulder. Then I was down, my right arm buried up to my neck, my body weighted down by all the gear and thick clothing while the snowshoes were pointed upwards at right angles. I took the camera strap and gripped it between my teeth, then attempted to roll over to my left side.

My left hand was down on the snow, which went up to my shoulder blade as fast as it did with the right arm! Slight frustration had begun to set in; I had no clue what I was in for during the next very long and strenuous ten minutes. With much groaning and whimpering, I pulled my arm free and rolled on my back, still holding the camera and the snowshoes still pointed in a cockeyed fashion towards the sky.

So I had two left feet attached to the Bozo shoes, I was encumbered with the heavy pack and still trying to keep the camera from making contact with the white stuff. I had learned NOT to put my hands down (hey, once was normal, the second time was reactionary). There seemed to be one area that was packing down fairly well, the spot right where my bottom was: I had made a complete 360 during my struggle. I thought if I could just move enough of my body out of the center spot, the snow would be packed down hard enough for me to put my hand down and possibly get myself out of that situation. Having squirmed a fair amount to make the attempt and with false security I tried to rise, only to break through the thin crust I had formed! Where the heck is help when you need it? Besides, nobody could help unless they were wearing snowshoes, too.

Finally I had remembered a relative conversation just days previously, to lay flat and crawl out so your weight is evenly dispersed. Still grasping the camera strap in my mouth I brought the camera up to my face as close as possible. Here’s the picture; a backpack holding a few thousand dollars' worth of gear and film, camera straps worn like a bridle and legs crossed like a giant X with huge, metal and plastic 'fins' sticking up. The soul of this moment? "Why don't you take one off and use it as a lever?" Hey, given enough time to calm down and think things out rationally, I would have figured that out. The simple difficulty laid in the attempt to bend into the right position to reach the straps on my feet, unbuckle them and yank that ice flipper off. Again I rolled over on my side, placed the aluminum shoe on the terra-unfirma in front of me, put both hands on the makeshift support and pulled myself erect. Relief flooded me, how stupid I felt for not thinking of that earlier!!!

I have come to the conclusion that in any given predicament, one will opt for the rescue attempt if there is another human being within a reasonable distance, despite the inability of that person to do so. So next time maybe I’ll practice on the living room floor before going out alone. Not a bad idea, ‘eh?
Posted by Pooz Korner at 2:20 PM No comments: