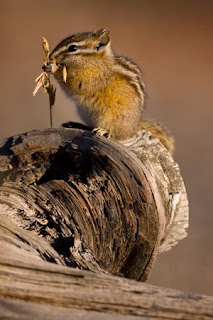 It has been a long and dreary winter, not so much that we were buried in snow this year as it was that there wasn't much snow. The brown flora from last fall was the predominant feature and a bit depressing. Every now and then I would wake up to a lovely blanket of pristine whiteness only to have it melt by that evening or the next afternoon. There was no promise of building a snowman and topping it off with a steaming cup of hot cocoa and my dream of building my own personal toboggan run melted with each dissipation.
All this has been dispatched with the first sight of several purple and white crocus popping open their little heads! Every morning I walk out with my coffee and savor their gift, they will soon be gone and I'll have to wait for the tulips, daffodils and hyacinths. I thank them for being the first harbingers of the new season and for giving me something to look forward to, their cousins soon to follow.
This morning was the same but with an added bonus; two tiny chipmunks were feeling the effects of the warm sun as well. Scampering over the lava rocks and chasing each other around the tulip leaves, they sped right past my legs, never afraid of the human standing so still above them. I read earlier that these little critters are hermits except for mating season so I am under the assumption these two are dating. They would chase and turn to each other, nuzzle their noses and resume their chasing.
I guess there will be little ones to come in the next month. They have found a safe and predator free homestead by burrowing under our house!
A few months ago Kevin was trying to tell me that he kept hearing things in the walls and under the floor. I did my wifely duty and replied with, "Yeah, sure honey. How the heck can anything get under there?" Of course I did my inspectionn tour of the entire building circumferance, noting there were no holes dug and the vent blocks were all still in place. And then after my visit with the chippies this morning I watched them high tail their little selves right up under the framing at the corner.
Okay Kevin, you were right. I digress, you win. (:
Another sign of spring here in Central Oregon are the deer. After wintering over in Christmas Valley they are passing through here and returning to their various hunting grounds. Our house just happens to be in one of their migration corridors so we get them coming and going and even just hanging around here as well. Kevin said he saw one of the does and her two fawns from last year, she showed them the birdfeeders where one can nuzzle out a few goodies if you get your nose in there just right. Then she meandered over to the watering pan we leave out for the birds and squirrels.
I'm sure if you listen hard enough you would be able to hear her say; "Now children, this is a pretty regular spot to catch a drink, it seems to have a running stream of fresh water every day. And over there where that sweet smell is coming from? That's a real treat of oats and molasses and corn! This is just one of the mother load stops so keep this in your memory for the future and for your children."

And I would like to credit Mr. Richard Cameron at racphoto.com for giving me permission to use his photo.
Posted by Pooz Korner at 2:39 PM 1 comment: