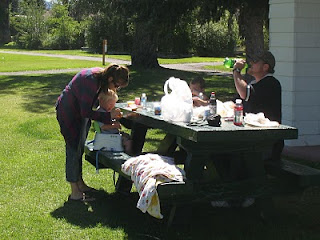 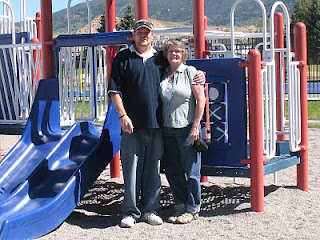 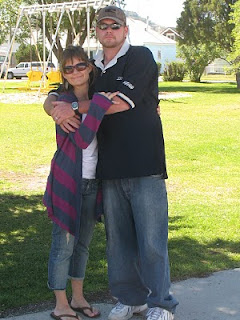 The "Girls' Road Trip of 2010" came to a climactic finish. I think we did rather well considering we were in a small vehicle with a 2 year old and a 4 year old coming and going for almost 15 hours both ways. And the fact that mother and daughter were together for six days, everyone survived and we still love each other and we're still on speaking terms; that is a successful adventure!
I had been thinking about this trip for a couple of months so no matter what occurred, I was going, it was important to me to keep family ties together. Just a short while ago Sara had asked if she could come along if the timing were right for all of us. "Of course I would love to have you and the boys come!" Thus the planning began for the reunion of Mom, Mike and Sara--the three of us not having been together at the same time for almost 13 years. Having Evan and Eric with us was simply the icing on the cake.
On the 31st of August, I drove over to Corvallis, Oregon and left my car with Bret so he'd have a vehicle if he needed one. Oh and Bret--thanks for loaning me your little family for the week! I know you missed them and it was terribly quiet around the homestead!
Then on the 1st of September, we headed out of Corvallis at 4:13 a.m towards Butte, Montana. When Sara crept into the boys' room to get them up for the trip, Evan popped up wide awake with, "Are we going to see Uncle Mike???" The truck had been loaded the night before so all we had to do was get dressed, brush our hair, toss the boys in their car seats (still in pajamas), say our goodbyes to Bret and hit the road. Shortly after hitting the highway we just HAD to get some coffee, makes the trip a little more tolerable. I think I've now tasted a fair share of interesting flavors other than my favorite hazelnut latte; toasted marshmallow and then a coconut something or other. Sara was the pilot and grandma was the dropped teddy bear picker upper, blanket fixer and drink cup filler/retriever. Sara's little truck had one of those new modern tvs that pops down from the ceiling (like airplanes) and that was surely a saving grace for the little guys. Sara did play a few "I see something blue" games with Evan. All in all, the boys traveled very well.
We got into Corvallis, Montana that evening around 7:00 p.m. and stayed with my old co-worker and girlfriend, Judy. I've known her since Sara was ten years old...hmmm, that's 18 years now. Thanks, Judy, for letting us spend a night at your place and you finally were able to meet the real kids, they are now more than a picture on your refrigerator! Just before that, we stopped at a restaurant for dinner and were able to have two friends of ours stop in to see us as well. Talk about squeezing in the opportunities!
Thursday morning (9-2-10) we were in Butte by 10:00 a.m. to pick up Michael. Sara had not seen him in 4 years and how they hugged! It warmed this moms' heart to watch that. "Uncle Mike! Uncle Mike!" was hollered in unison when Michael leaned in and finally met his nephews!
Well, he had met Evan when Evan was a tiny baby but he had never seen Eric. Oh how these few moments had made the long way so very worthwhile. I had booked a room for all of us at the Best Western downtown and we headed off for three days of family fun!
Our adventure included a picnic at a fantastic park where the little guys (and the big kids, too) could ride swings, go down slides and roll down a big hill. When we returned to the hotel, we made good use of the indoor swimming pool; the boys loved the water but hung around the steps the first day. By the second day they were wearing their arm floaties and paddling off alone (adults within reach, of course). We all loved it, I hadn't been swimming in years and boy was I out of shape! Sara, Mike and I were having a ball with the kids. Our stay primarily consisted of finding the right places for all of us and we succeeded so that all of us were happy. We were able to take in the view of the Berkeley Mining Pit and read about it's history (in 1917 there was a horrible accident and fire that killed 168 miners, 11 people survived and Kevins' grandfather was one of those!) We also were able to view Evil Knievels' grave site. WHat a visit, incredibly happy just to be together.
How I would do this again. Warm fuzzy feelings. I am so greatful and thankful to God for letting all this come together without any flaws.
And oh how hard it was to leave.
Posted by Pooz Korner at 9:37 AM 1 comment:

Shoeless and Clueless on The Highway

I have just returned from my last road trip for the 2010 year and I have this recurring question about; Highway Shoes. Hundreds of them. Where do they come from? What was the circumstance that left them sole side up in the middle of the fast lane? And have you ever noticed it's always just ONE? Was it left on the top of the car? Were the kids playing in the backseat and one threw a shoe out the window? There was one that was purposely stuck on some outcropping on a cement center divider wall, toes up. There is no way it could have landed like that. Somebody being funny or bored or a sibling payback when the family stopped at the side of the road for a potty break?
And then it was this trip that I thought about starting a Lost and Found Shoes of Route Whatever. You know, picking them up and posting them on a website, maybe along with all those lost hubcaps you see peeking through the roadside weeds. Yeah well I have better things to do than that, really. I'd never get to where I am going if I did that. It just makes me think about them because I have never lost a shoe on a trip. These aren't little tykes' shoes, they are adult sized shoes. And I bring this up because I thought I was the only one whoever thought about them. Until Sara mentioned it on this trip. So...if there is anyone out there who has ever lost just one shoe, call me. I might have seen it on that scenic route to Butte, a hundred miles from anywhere.
Posted by Pooz Korner at 9:21 AM No comments: