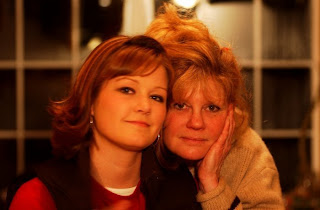 A "Big Girls" night out

We all wonder what our children are going to be like when they grow up.
We look forward to having wonderful relationships with our kids and I can now say that I am reaping the benefits of an adult child! It has been about a year and a half since Sara and I were able to have our own "mother and daughter" time so Saturday we had our first girls' night out. Sara had planned on dinner and a play, a real live play. Now, I have one under my belt since I saw The Jersey Boys in San Francisco with my childhood girlfriends last September, but Sara has never seen one. We decided we would also have dinner out at a nice seafood restaurant. She didn't have to cut meat for anyone and me? Well...I didn't either (: As a small celebration, we both ordered a strawberry marguerita. Our mouths were watering for that long before they arrived. Several minutes of talk about anything besides bottles and diapers was refreshing. We talked about what we thought the show would be like and how nice it was to be "just us girls".
We had manners; there wasn't one single belch at the table, we were so cool. The margueritas arrived and since Sara had been 'dry' for a year, I proposed a toast to us and our evening. Hey, this tastes great but, where's the salt?? There was no salt on my marguerita! Out of the mouth of my babe, "Mom, it's a bit late to dip it now", I could see the giggle on her face.
Oh what the heck, it still tastes pretty good. Then came the meal! An appetizer of bruschetta with crab and artichoke dip, oh now that was heaven, we should have just ordered appetizers for our dinner!! We both decided on steak and grilled shrimp; we were splurging but not clogging our arteries entirely, oh and salad, of course. We had so much fun talking and relaxing and eating that we didn't have time for dessert, which is okay in our world at the moment.

So, Sara and I went to see "The Vagina Monologues". Now, if you know me, I would have been thrilled with "Bees", "Happy Feet", etc. But, this?? with my 26 year old daughter??? Okay, I guess we have to grow up sometime. I had heard the name of the play before but I really had no idea what it was all about. Women. Something female and guys wouldn't like it, it was a smash on Broadway and that was the extent of my play information. Very very different, but this was our 'big girls' night out. Still, it was nice to see Sara dressed up, arms free and with no crying weaved inbetween our conversations.
A week ago we both had bought some new shoes, Sara's husband calls mine "hooker shoes".
Pointy toes, spike high heels, I was going to be dressed up somewhere, sometime. Sara said, "Wow, mom, never thought I'd see you wear those!". Well....I wore them Saturday night, out to "the city", nothing was going to be too good for our Big Girl Night. I found a parking spot within a few hundred yards of the theatre's entrance, good for our feet because the both of us lasted about ten feet before I had already caught the heel in a hole in the cobblestone street, passersby were hearing,"Ooooo! Ouch-ouch-ouch! Ooooo rghhhhgghhr, ouch!" Remember all those old movies where you'd see men dressed up like women and they would totter around in those heels? I always thought that was a bit dramatic until I had to walk in them. Maybe I'll stick a hook in them and hang them on the Christmas tree or something. I would absolutely believe these were somthing that the Marquis de Sade invented! Hooker shoes after all, lol!

We arrived at the Tower Theatre down there in Bend, hundreds upon hundreds of women. I have never been around that many women before, never! It was truly like being in a henhouse, all that high-pitched chirping! Sara and I were just inside the door to show our paper ticket when I heard a male voice behind me, "I see some other men in there...". This had to be the first time in my life I have ever heard a man showing his insecurity in public like that, and within earshot of all that femaleness. I'm sure it was a real slip and spoken before he could catch those words. Yes, there were a few men there. Probably ten! I discovered that my fascination with the whole event was the true people-watching!! And listening to the snippets of conversation, the laughter, the giggles. There was a group of 30-something gals sitting in front of us doing their visiting when two women acquaintances of theirs leaned over to speak to them (we were in aisle seats in the rear) when a part of the conversation grabbed my attention. This one lady was speaking about having "big girl drinks", I didn't hear the rest of the line because I leaned over to Sara and whispered, "What's a 'big girl' drink?" She shrugged her shoulders, she didn't know either, but I loved the speakers' line and hooked it onto mine and Sara's evening. Big Girls. This was our big girls' night and we had a big girls' drink, ya think?

Only in a place where women are gathered would they have a buffet table set up with cookies, brownies, candies and coffee. In a theatre, downtown. It was kind of warm and close, actually.
I won't go into the play, that can be seen online somewhere. It was the act of going and being that was fun and worth talking about, lol!
The poor gal who sat next to Sara and I must have gotten up 10 to 15 times. But then, she was a rather big woman and she did stretch her long legs out into the aisle which was much more comfortable than being scrunched up in our seats. I will remember that for the next time.
I took Sara home and made sure she got in her front door okay, everyone else was in bed and I drove home with a big girl smile on my face...
Posted by Pooz Korner at 12:30 PM 2 comments: