This day of honor brings an occasional tear and quiet reflection now.
My dad is gone, physically, but spiritually and emotionally my dad is with me in my heart. As with my mother who passed away 33 years ago, he is in my conscious thought every day. So dad, this is for you... 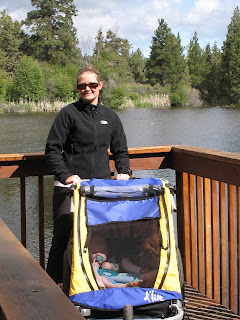 It is early summer here in central Oregon
and I am finally catching some much appreciated time off. The weather
has been mostly overcast with intermittent rain, of which I am not
complaining like most residents here because I know what's coming. I
call them "Death Valley Days", when the heat is searing and the
humidity does seem high (at least to me) come August. The leaves of the
trees seem brighter and greener, the dust is down, my allergies have
abated somewhat, the newly-popped blossoms of lilacs and fruit trees
permeate the air. Fresh air!
A few days ago Sara asked me if I
would like to join her on one of her hikes around Bend and I heartily
agreed to do so. She said this hike was about five miles and that
moment there was a spike in my heart rate. Five miles?? Jeez , I
haven't hiked five straight miles in a few years but hey, with what I
do at work I was pretty sure I could handle this. I walk a lot in my
work and there is a considerable amount of lifting so I was pretty sure
that the ol' mean, Granny machine could produce the muscle and stamina right to the finish line.

"Mom, do you have walking shoes? How about shorts or something like
sweats so you don't chafe? Do you have a hooded sweatshirt and a
headband so your ears won't get cold?". This brought memories of the
days when it was me throwing out those questions when the family would
go camping. I scrounged up some comfy pants to wear, an old sweatshirt
complete with hood, my headband, sunglasses, cell phone (not like
anyone calls) and my camera.
We did diaper changes and got bottles ready, changed The Boyz
and grabbed the blankets and of course, Teddy. Teddy is Evan's stuffed
buddy and goes everywhere Evan goes. We didn't have to worry about a
buddy for Eric since he's not quite formed that kind of buddy
attachment yet. Out to the garage where Sara loaded Evan and Eric in
the bike trailer, tucked them in and zipped them up and we were ready
to go. There was sunshine and not a cloud in the sky, a good breeze was
going so we could work up a sweat and still be cool. Off we
strode at a fairly brisk pace and Sara says, "Can ya keep up, Mom?".
Hey, I can do this, ya know.
Two blocks into the walk, I start to think. Thinking is not always good. "Do I back out now while it's still early? Ah jeez,
I'm gonna feel this tomorrow and the next day and the next. No no no,
I'm going to do this because it's good for me, it's time with Sara and
my grandsons and I get to see and smell wonderful aromas and work a few muscles that
don't usually get it." Sara had a good pace going as she was pushing
the bike trailer, the boys were settled in the tiny cab like sardines
in a can and I was changing my thoughts from "Can I? to I can do this!". It
took us a few more blocks to get our rhythm and we settled in. It truly was a great day for this jaunt, in between various silences we chatted about previous walks Sara had made, newsy tidbits with the occasional "How are ya doin'?" inquiries.

We passed quaint little houses with lovely flower gardens and 'natural'
landscaping, little shops and stores I had never seen before that pass
by so quickly when you are in a car. There was a tiny little park by
the DeSchutes River that sidelined us for a few moments, we enjoyed the
scenery while I took some photos of Sara with Eric and Evan in their
little car.
Another place that sidelined us was a strip mall with Macy's and T.J. Maxx, good
thing we left most of our money at home as we grabbed a cup of coffee
at a drive-up coffee shop before hitting the stores. Macy's was a bit
of a disappointment, we seem to get some sort of attitude from the
clerks every time we go in there. Next stop was T.J. Maxx , it was fun
and relaxing to peruse the decorating items they have and I succumbed
to a huge bar of soap with the most wonderful fragrance of jasmine. By
this time the boys were getting antsy, Evan wanted to stretch his legs.
We let him out so he could walk while holding onto Grandma's hand but
oh no, he wasn't going to have much of that. After some gentle coaxing
he just wasn't going to go with this so he plopped down on the floor
with a little tantrum. I swooped him up in a flash and as I was going
through the exit door I remarked to Sara, "Well, been there and done
that before, ha ha!". We stuffed and packaged them back into their trailer and took off for the second half of our trek.

Sara had warned me that the uphill climb on Mt. Washington was a real
workout so I mentally prepped myself and off we went. But really, the
worst part of the whole hike was attempting to go through a four second
pedestrian crosswalk! Our allotted four seconds were taken up by
drivers that never saw us or ignored us because they just had to get
past us first! I would say that Mt. Washington was at least a half-mile
climb, I don't know the grade but if we were going downhill and were to
let go of the bike trailer , it would definitely race down at a pretty
good speed. Pushing the trailer uphill with two babies in it increased
the heart rate pretty good. At one point, Sara took Eric out because he
simply wanted to be held, so while she trudged up the hill carrying
Eric (who probably weighs about 18 pounds) I was pushing Evan in the bike trailer.

We finally made it to the top after a few stops for me, which by this
time I was just a bit winded but still holding my own pretty good. The
view from the top was worth the hike; it was a 360 degree scene of Bend
in a bowl! The mountains were in clear view, a nice breeze to keep us
cool and full sunshine. The rest was literally all downhill. Upon our arrival
back home, Sara asked me if would be willing to do this again and I said sure I would, just not tomorrow.

I wouldn't have passed this day up unless I was literally bed-ridden. A
lovely day with my daughter and grandsons. Definitely food for the soul.

Now, two days later I am feeling fairly great, the long walk didn't do nearly
as much damage as I thought it would and I am ready for another one. Next week.
Posted by Pooz Korner at 9:25 AM 2 comments: