I am trying to remember where it all began. You know, that frustration with technology. I was sitting in the living room of a log cabin in Alaska sometime in the fall around 2003, fiddling with one of three tv remotes. Each one had it's home place so I could simply pick one up and use it in whatever order was required.
And of course the day came when they happened to be in a 'remote jumble' and I knew this was going to be a mess for me. When it comes to machinery or electronics, I am the proverbial dummy. "Honey, I can't get the lawnmower to start and I've yanked and yanked on that ropey string thingy!"...MAN walks over to lawnmower and it starts. Car turns over with the first ignition turn. Washing machines act the way it is supposed to. You know the drill.
As my psychological stress level grew with each remote that I picked up I let loose with, "Whatever happened to just ON and OFF??!! I just want to turn the tv on!!" Little did I know that was only the beginning of my mechanical-brain demise..
Fast forward to 2011, a homey little laundry room in rural La Pine, Oregon.
There are two central figures; one is a non-descript white, front-loading washing machine and the other is me. For months I've been complaining about how the washing machine has a mind of it's own and we are at war. One of the many things I don't like about this object is the fact that it has a complete lock on my life from the moment I push the wash button to the last turn in the final spin cycle. Every now and then I forget and leave something in a pocket of my work apron or a pair of jeans, etc., and I know this because the item ends up sitting right there on the washers' window sill. Staring at me. Lip gloss gets sucked out of it's container and goes-who-knows-where but the little tube sits there waiting, watching me. I hear it through ESP, "You can't get me!" Or a note I needed for later is slowly shredded right before my eyes, in the window of that confounded machine. No, you can't stop it and open the door. It is locked and loaded and all inside belongs to it until it gives up it's final tumble.
But lately The Machine has been acting odd; once in awhile it won't spin all the water out and the clothes are dripping wet when I go to remove them; this requires shoving everything back in and resetting the spin cycle, another twenty minutes of lock-down. In the last week, The Machine has been getting hung up on a cycle and this requires a complete shut down so the ELECTRONIC (!) memory chip can reconfigure. Or whatever the heck it does when it's "off" for another twenty minutes. But just a few days ago I had had enough when the last cycle was stuck on spin. It was not a house rattling, floor-shaking spin but a geri..at..ric r...o...l...l for FORTY FIVE MINUTES!! I stomped out into the living room and announced to 'MAN' that I was going to pick that washer up and throw it out into the back yard! 'Man' had that what-the-heck-is-wrong-now look and after several minutes of stomping and threatening and mumbling under my breath and Man walking in and starting the washer with NO problem, I am now expecting a new washer and dryer next week. A top loader. One I can stop whenever I want and take out things I forgot shouldn't be in that load, or retrieve that just remembered lip gloss or put bleach or softener in.
That funny little voice of "Whatever happened to ON/OFF?" popped into my head after all these years. Now it starts with what happened to SIMPLE? I noted on facebook (okay, a modern technological wonder) the other day that all I wanted was a machine that washes clothes. I don't want it to massage my feet, walk the dog, wash the car or cook dinner. I just want clean clothes in less than 30 minutes and I don't want to put a second mortgage on my house to buy one.
I am now going to be the proud mama of a SIMPLE washer and dryer next week. I am a happy WOMAN now.
Posted by Pooz Korner at 12:29 PM No comments:

Sophie The Duck Gets Her Mojo 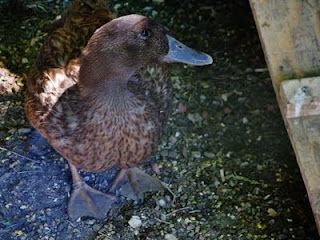 Sometimes a seemingly ordinary action turns into a rather touching little event.
Last week I posted an ad on our local Craigs' List selling one of those plastic molded pond liners. One never really thinks of the outcome of such a mundane act; where do they go, who will buy it and what will they do with it? Right? Right. Out of sight, out of mind. Until this one found a home and to whom it went to...
Her name is Sophie. She is a duck. And this little duck has been spending her life in competition for water with her dog friend. Now, the water has always come in the dog bowl and as you know, most dog bowls aren't big enough for a duck to swim in. Still, Sophie was attracted to the water like a...duck is to water. Just as Sophie would be happily splashing in whatever water she could get her feet or bill or whatever in, the dog would most likely get thirsty. That's when Sophie and Dog would collide, and Dog would win.
Until a few days ago, that is.
Sophie is now happily circumnavigating her own little ocean, planted somewhere in her backyard, her little head tilted up toward the sky and little quacks cheerily escaping her throat.
Life is good.
Posted by Pooz Korner at 10:25 AM No comments: